I am kind of an obsessive list maker when it comes to traveling. What? I just like to be organized. Since this was my first trip to Indonesia, first ever SCUBA dive trip, and first international vacation in a long time, I was seriously stumped on how to pack. I did a lot of googling phrases like “scuba trip packing list” “what to pack for Indonesia” “how many pairs of underwear for 15 days”. While I didn’t find a one stop shop for a packing list, I cobbled together my own packing list using a few different resources (including this “how many underwear to pack” chart). 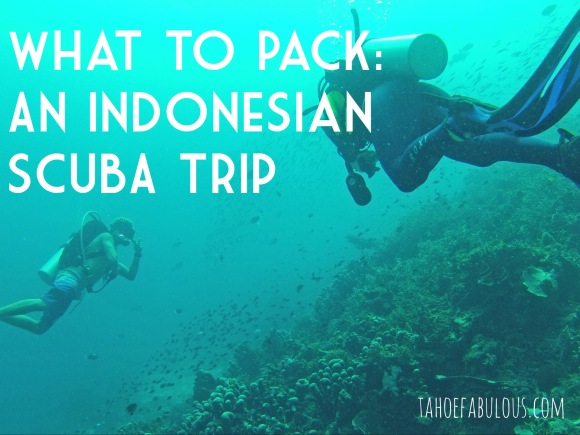 Here’s a screenshot of my obsessively categorized and color coded packing list:

For reference, our trip was basically 5 days of travel time (2 there, 3 back) and 10 days SCUBA diving at the resort. We really didn’t do any other traveling or activities other than SCUBA/snorkel/swim. So if you’re going to be doing any hiking, temple visiting, climbing, etc., you’ll want to reference some other lists as well. I packed a lot of things I already owned and had for a long time. For items that were specifically awesome, I’ll link to them.

On the plane, I wore lightweight leggings, the grey Krochet Kids t-shirt, compression socks, sweat shirt, and running shoes. I looked a little sloppy, but in the airport I ditched the sweatshirt and running shoes, put on the Sanuks and the straw hat and felt like I looked presentable. In my carryon, I packed a dress, extra underwear, running shorts and my favorite swimsuit. I figured I could get by on that for awhile if my luggage got lost. 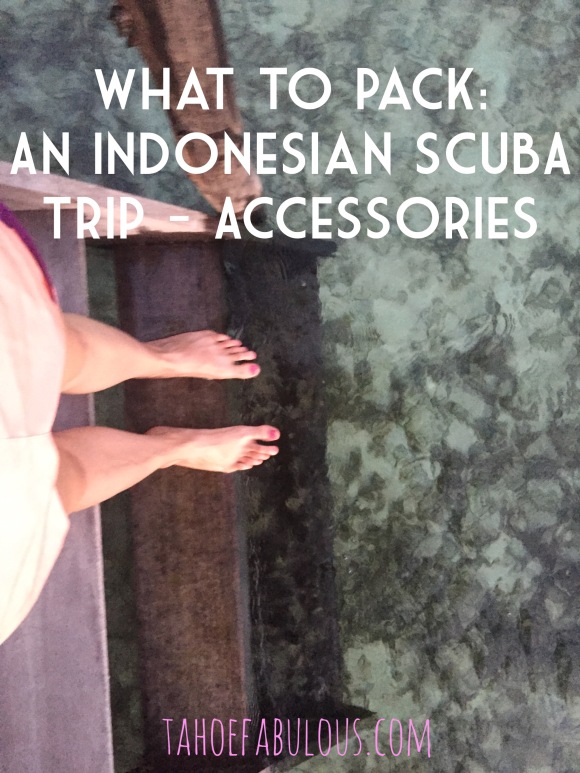 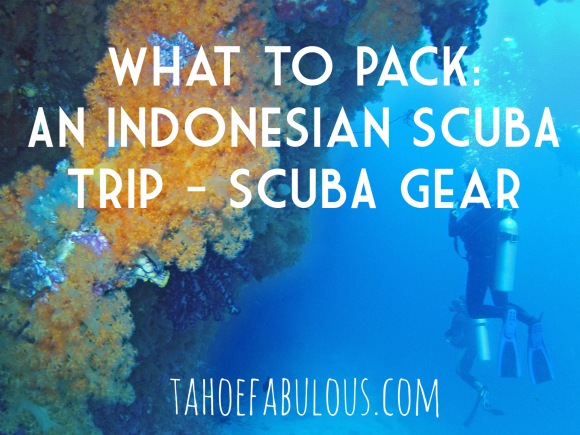 Note: I rented a BCD and regulator from Papua Explorers Resort. The resort also provided weights and a reef hook to the guests.

There’s my list! While (nearly) everything I brought got used, there were a few standout products that I have to call out specifically.

Obviously, I think SNAP is an awesome program! In addition to supporting SNAP, the Film Festival is a super fun event. We have a silent auction with prizes like whitewater rafting trips, wine tasting, hotel stays, etc., an activism area where guests can learn about local environmental issues, a backstage VIP area, beer and wine, and a filmmaker Q&A.

Most importantly, the films we show are amazing. Our goal for WSFF is “adventure with a message”. We show cool people doing awesome things in beautiful locations, but the underlying message is about the importance of protecting the places we play and beyond.

“Preeminent conservationist David Brower called him his conscience: in the 1950’s when the Bureau of Reclamation proposed two dams in the Grand Canyon—one at Marble Canyon and the other at Bridge Canyon—the late Martin Litton made sure the Sierra Club didn’t acquiesce. Martin believed the best way for people to understand how important it was to preserve the Grand Canyon was to have them experience this secret world from the river, but not in just any boat. Martin pioneered whitewater dories on the Colorado River in the 1960’s and started a proud tradition of naming the boats after wild places that had been lost or compromised by the hand of man. Now, some 50 years later, America’s open-air cathedral faces continued threats from development and mining and it’s up to all of us to ensure the crown jewel of our National Park system is protected now and for future generations. Martin’s Boat is a film that honors the legacy of Martin Litton and follows the newest boat in the Grand Canyon Dories fleet, the Marble Canyon, on its maiden voyage down the legendary Colorado River through the grandest canyon on Earth.”

Our other feature film is Mile for Mile, made by Patagonia and filmmaker James Q. Martin.

“Ultrarunners Krissy Moehl, Jeff Browning and Luke Nelson ran 106 miles through the newly opened Patagonia Park in Chile, to celebrate and highlight Conservacion Patagonica’s efforts to rewild and protect this vast landscape. Patagonia Park, in the Aysén Region of Chile is now open to the public. The park sweeps from the northern ice cap, down to the Baker River and out to the arid borderlands of Argentina. The park’s glaciated peaks, grasslands, beech forests, lakes, rivers and wetlands still boast all of their original species—and the rivers still run free. Patagonia, Inc. has been involved in this project from day one—helping with the first land purchases, sending volunteers down to rip up hundreds of miles of fencing and restore open grasslands, and fighting mega-dam projects on the nearby Baker and Pascua Rivers.”

In addition to these two amazing features, we’ll be showing 10 other short films ranging in length from 1 – 12 minutes focusing on climbing, paddling, skiing, hiking, and more, from Yosemite to the Grand Canyon to Antarctica.

We’ll be hosting the 11th Annual Wild & Scenic Film Festival – South Lake Tahoe this Thursday, March 31st in the MontBleu Resort Casino Spa Showroom. If you are in the area, I highly encourage you to attend this event! You can buy tickets ahead of time online here or in person at the Patagonia store in Heavenly Village. We’ll be selling tickets at the door, but there’s a discount if you buy ahead of time. Doors open at 6 pm; films start at 7 pm. Tickets are only $12 for Sierra Nevada Alliance Members. 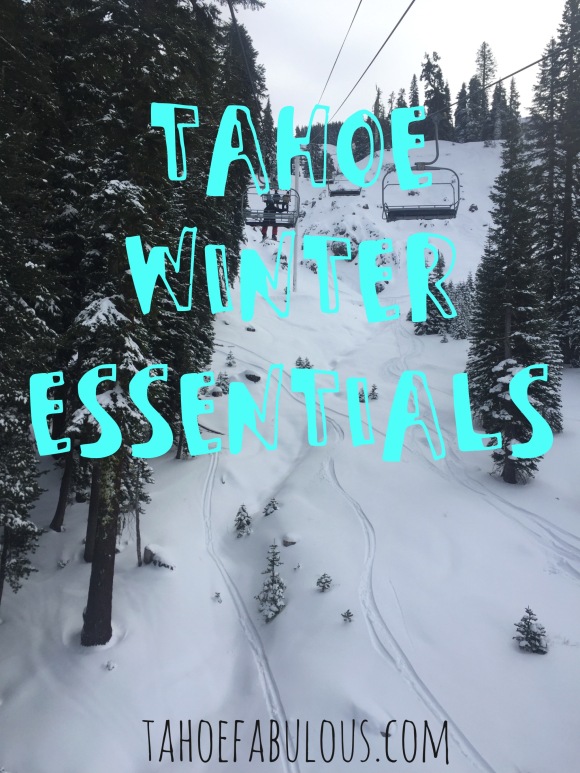 Well, we’ve gotten more than a couple of feet of snow in the mountains over the last few days – I’d say it’s definitely winter! While we haven’t had a ton of snow the last few winters, I’ve figured out a few things that make the winter more enjoyable.

These essentials would make great gifts – for yourself or anyone who needs help staying warm this winter.

The leaves are changing, the weather has cooled off, and I’ve started craving pie at every meal. It’s fall!Boots, scarves, tea, pumpkin spice lattes, etc – there are many things that people consider essentials for the autumn season. Here’s my list of must-haves for a perfect fall in the mountains.

I also have a great soft shell jacket from Icebreaker and a wool base layer that I got at the Patagonia outlet years ago. Why wool? According to Sierra Trading Post, “Wool is one of nature’s best insulating fibers and has been used to make clothing for centuries. Not only is wool extremely good at holding in warmth, it also wicks moisture and dries faster than cotton.” Wool is definitely worth the cost, and it smells way better than synthetic fabrics after sweating. Just a warning – I dry my socks in the dryer, but all of my other wool products get laid flat for drying.

The Patagonia Torrentshell is slightly visible in this picture of Yosemite Valley last October.

While not the lightest or the most packable, the Patagonia Torrentshell raincoat keeps me totally dry while still looking pretty cute. I was at a mostly outdoor work training last week, and it poured for much of Saturday. The Torrentshell kept me dry, warm and comfortable the whole time. This time, I wore it over my Patagonia Half Zip Fleece, but I have also worn it over a puffy vest or down coat for wet snowboarding days.