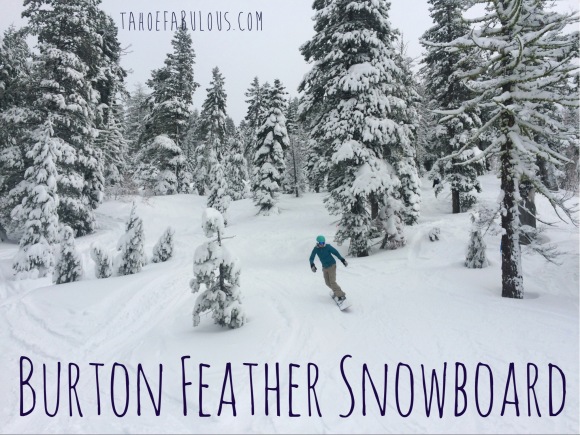 When I moved to South Lake Tahoe in November 2010, I had been on skis a total of 3 times, and I had never been snowboarding. I’m one of the few people who moved to Tahoe for the job and took up winter sports instead of vice versa. Despite the fact that I’d been skiing a few times, I ended up a snowboarder for a couple of very simple reasons:

My first board was an old Burton, covered in stickers and dings, and it was a great board to learn on because I didn’t have to worry about messing it up. As I started to move from beginner towards intermediate, I decided it was time to buy a new snowboard.

After some research and stalking end of season sales, I ended up buying a 2013 Burton Feather. I’ve ridden on it for a couple of seasons now, and I feel capable of giving it a thorough review.

First, I feel like this board was a perfect board to progress on. Since buying this board, I have moved from low intermediate through solidly intermediate. I’m now moving into advanced territory, and the Feather still works well for me. I’m riding black diamond runs with confidence, take this board into powder (since we actually have some this year!), and I can ride in moderately spaced trees.

Burton described the 2013 board as

“Feather-like float for girls determined to get better. – Jump right into all-mountain fun, whether it’s your first time or 50th day. Laid-back and relaxed, the Feather’s upgrade to V-Rocker™ creates a catch-free, playful feel that’s easier on the muscles. Tapered shaping equals effortless turning and float in fresh snow while the twin flex means it’s good to go, forwards or back. Softer and more forgiving than the Social or Blender, the Feather is for the rider looking for more room to grow than they’ll get with our easiest board, the Genie.”

On the cons’ side, if you are an advanced rider who spends all of your time on steeps and in the powder, the Burton Feather might not be aggressive enough for you. I’ve found that the board sometimes “skips” on the steep sections and sinks into powder more than I like. I also don’t think that the board steers quite as well when you’re riding in switch, but I fully admit that it could be how I have the board set up.

I initially bought this board based on the reviews that touted its ability to take you from a beginner to an intermediate, and that is exactly what I did on this board. I’ll continue to ride this board for the rest of the 2015-16 season, but I am looking to upgrade eventually. It’s a fun board to ride, and I feel stable on groomed terrain. When riding off piste, the Feather handles different snow consistency well, and I rarely feel like I’m being thrown around, unless the snow bumps are large.

Heavenly, one of the resorts I’ve frequently ridden has A LOT of flat, narrow cat tracks that are the bane of snowboarders existence. I really noticed a difference on how much more stable the Feather felt on these flatter areas, allowing me to keep up more speed. I don’t feel like I’m constantly about to catch an edge on this board.

The Burton Feather is available in a 2016 model

Here are the specs (from Burton.com):

New for 2016: Flat Top –“A flat profile between the feet means stability, better balance, and continuous edge control. The tip and tail kick up with an early rise outside the feet for the catch-free, loose feeling you’d expect from rocker.”

Directional Shape – “The classic snowboard shape, designed to be ridden with a slightly longer nose than tail to concentrate pop in the tail while still giving you plenty of float, flow, and control to rip any terrain or condition.”

Flex – “The flex is perfectly symmetrical from tip to tail for a balanced ride that’s equally versatile regular or switch.”

You can buy the 2016 Burton Feather here

Bottom Line: if you are a beginner who wants to move from the greens to blues and beyond, I highly recommend the Burton Feather.

Are you a snowboarder? What board do you recommend for intermediate riders?

Check out my Favorite Snowboarding Gear for Women here!